Rumors have begun to surface that the Obama Family have purchased an Asheville home for use after the President's second term ends. While the White House has not confirmed the news, it wouldn't be a complete surprise to those people who have followed the President's recent visits to Asheville. 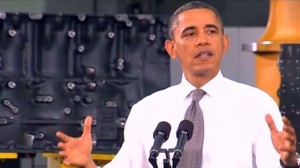 Obama speaking during one of his Asheville visits.

When Obama visited Asheville in 2013, he hinted then that he and Michelle thought Asheville might be their next stop. As noted in Greybeard's blog post about that visit, he was partial to the people and the food in the area. And that wasn't his only trip to the NC mountains. In his 2011 campaign visit to Asheville, he spoke fondly of Asheville, as noted in another Greybeard blog. The most recent talk about the Obamas relocating to the area indicates a home already has been purchased, though again this hasn't been confirmed. Another point of discussion is whether the home would be a permanent home or a getaway vacation home. While some pundits favor a larger city like Chicago or New York for their permanent home, others point out the peace and solitude the whole family would find in the area.

Regardless of whether it's true, it's great to see the fine words about Asheville. While it's news that Obama might be becoming our neighbor, it isn't news that the western NC mountains make a great retirement location. Greybeard Realty has known about the good value of an Asheville retirement for a long time. As to the veracity of the latest rumors, we will keep an ear to the news and keep you posted when it's confirmed as true. And if you've been considering retiring up this way, it may be time to follow through. After all, chances are that an Asheville retirement has just received a Presidential endorsement.