If Swannanoa Valley sunrises and sunsets are on your must-have list, then you need to check out 14 Red Plum Lane in Black Mountain. This four-bedroom, three-bath semi-detached villa provides incredible colorful views of the magnificent valley. At the same time, it offers easy proximity to downtown Black Mountain and all it has to offer. 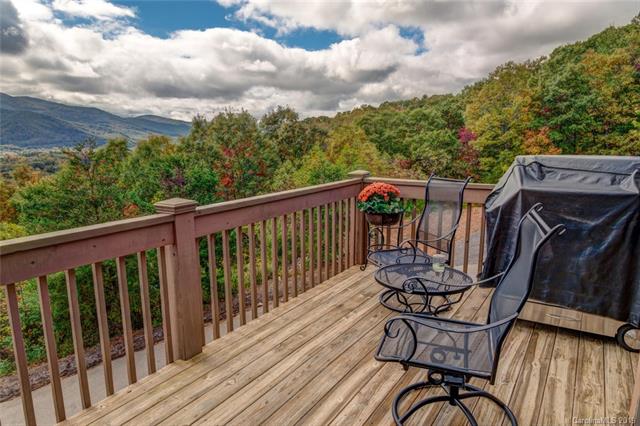 The main floor of this home, easily accessible by a one-step entry, features incredible sunlight through spacious windows and mountain charm with special touches like a stone fireplace. The natural flow from foyer to living room to sunroom, dining and kitchen areas make it a perfect home for entertaining. And the exquisite view from the deck will keep new owners outside watching the changing colors for hours at time. A two-car garage has custom built storage, and a three-car garage has a family rec room/workshop, providing ample space for storage and family time space. There’s also an acoustical media room with hardwood floors and custom cabinetry. Outside, there’s a gorgeous garden with roses and numerous budding trees including a Kousa dogwood, a Franklin tree, and a redbud. All again, all of this is within a five-minute drive of Black Mountain. 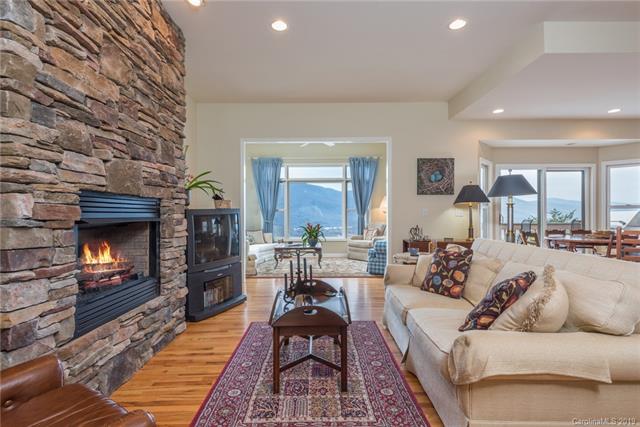 New owners at 14 Red Plum can use this lovely home as their primary residence, a second home, or a rental property. And regardless of its use, this home allows residents easy access to town. Black Mountain, with its small town feel with big-time amenities, provides an incredible array of restaurants, coffee shops, and bakeries. In addition, this charming town features numerous shops and various galleries. And if you’re more about the outdoors, you will find some of the most beautiful, varied hiking trails in all of western NC an easy distance from downtown Black Mountain.

For more information about this home, please contact Greybeard Realty. You can take a look at more western NC homes for sale by looking here. And if you have a home you’re ready to list, you can look on the Greybeard sellers page to get some tips on how to make that happen. The warmer weather of summer makes a great time to spend time out on the deck, watching the sun set. Isn’t it time you had a home that let you do that?

For several quarters now, signs have been pointing to a shift in the western NC housing market. The 2019 first quarter numbers further indicate that supply continues to increase while average price is holding steady or decreasing. A closer analysis of these 2019 indicate that these and other numbers support the notion that the western NC housing market is slowing a bit. 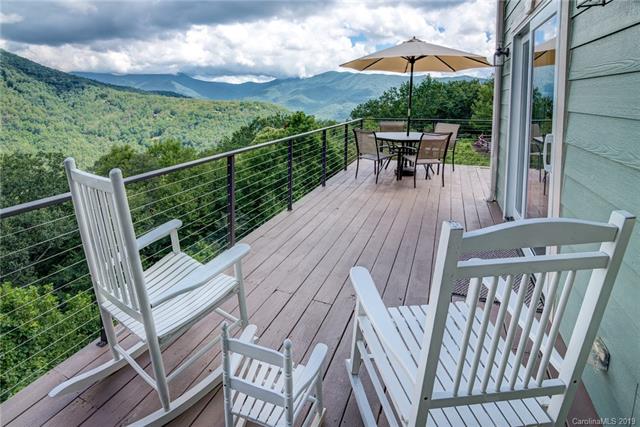 In Buncombe County in the first quarter of 2019, the number of homes sold increased 4%, up to 786 units as compared to 754 homes in the same period for 2018. While that number may seem modest, it represents a steady increase in the number of homes sold since 2012 when only 535 homes sold during the first quarter. In terms of total sales volume, the market increased 4% as well in 2019, growing from $252.8 million to $264.1 million. Interestingly, the figure is almost double the 2012 first quarter total sales volume of $133.5 million. The average home price of $336,074 shows no measurable increase from 2018 numbers. That number, again, represents a substantial increase from the average home price for the first quarter of 2012 which was $249,513.

As was the case in the Buncombe County numbers, Black Mountain’s DOM increased as well, rising to 111 days in 2019 versus 79 in 2018. While this increase is steeper than the county figure, it still falls well below the 2012 first quarter DOM number which was 204 days. One final interesting number for Black Mountain is the number of units on the market for the first quarter. That number, 128 units, represents a 44% increase over 2018 first quarter’s 89 units. This increase, while again substantially higher than the county percentage increase, still falls below the 132 units listed in 2012.

As stated earlier, the loosening of supply and the slowing or turning of the average home price are both indications that the housing market pace has slowed. Add to that the increase in both the county and the Black Mountain market DOM numbers, and it seems appropriate to begin to talk about an early trend toward a market slow down. Now, it seems that all eyes will be on the next few quarters to see if this is a natural and expected settling of the market or perhaps more of a solid downturn. And as usual, a few more quarters of numbers are needed to make that determination. For more information about market trends, please see the Market Numbers link. And if you want to list your home, please check out the selling your home link at Greybeard Realty. You can find all of Greybeard Realty's exclusive listings here. And please contact Greybeard directly for more information about the western NC real estate market.