Over the last year, monthly reports have indicated that this could be a great year for Asheville area real estate sales. And now that the 2014 year-end numbers for Buncombe County and Black Mountain have been released, statistics confirm that this last year indeed was a very positive one. In both markets, figures confirm that the steady growth has continued through the year. 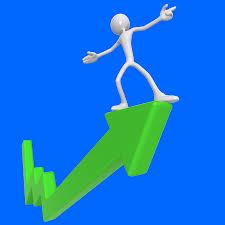 Asheville area sales showed a steady increase at year's end with the number of units sold increasing 4% from 2013 to 3,577 homes sold. Total sales volume grew 8% to more than $967 million while the average price per home increased 4% to $270,376. In fact, the only declining numbers reported for the region were in "days on the market" and the "number of units on the market" which decreased by 13% to 1,489 homes. This decline illustrates the tightening of supply on the market which should lead to increase prices in the future.

Black Mountain numbers mirrored those of Buncombe County, and the numbers were even stronger for this region. The number of units sold reached 170 for the year, a 13% increase over 2013. In addition, sales volume grew to more than $39 million, a 28% increase over last year. Also, the average price per home grew 13% to $229,838, a bit lower than Buncombe County prices. And similar to the County numbers, "days on the market" decreased to pre-2010 levels and the "number of units on the market" decreased by 13%, to 95 units. Like the Buncombe County numbers, all of these are still below the peak market numbers from 2006-2007.

If an idyllic Black Mountain home is on your wish list, look no further than 36 Cheshire Drive in Cheshire Village. This 3-bedroom, 2 bath home, constructed in 2000, has meticulous details and varied living spaces. 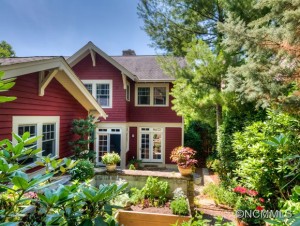 Take advantage of the mature plantings at 36 Cheshire Dr.

The home, which overlooks Cheshire Park, has a front porch perfect for rocking chairs to watch as life strolls by. And a back patio features stone work and mature plantings including raised beds. The modern kitchen has stainless steel appliances, and the various living spaces combine woodwork and clean, calm colors, giving the home a fresh, cozy feel. Cheshire Village is a wonderful walking community with restaurants, a gourmet market, and walking trails. In addition, you are only a short drive from downtown Black Mountain, with its amenities.

This move-in ready Black Mountain home is only one of Greybeard's Black Mountain listings. Black Mountain, the front porch of western North Carolina, has mountain craft and art stores, outdoor gear shops, and several microbreweries in addition to a wide variety of eating establishments. This lovely mountain community provides easy access to Asheville while providing a close sense of community. Why not contact Greybeard Realty and come take a look at this charming Black Mountain home and check out this home's beauty.