January is a great time to reflect on the local figures from last year and assess what trends and surprises we can cull from those numbers. In making my analysis, I am using the numbers provided by the Western North Carolina Regional Multiple Listing Service (MLS).

Perhaps most surprising to me was the sheer volume of homes sold in Buncumbe County in 2006--an astonishing $1.1 billion in sales of 4,072 homes.  That represents a 12% increase over the 2005 figures.  Of the amount in sales, $35 million were sold in Black Mountain and $40 million were sold in Swannanoa, an increase of 10% and 9% respectively. 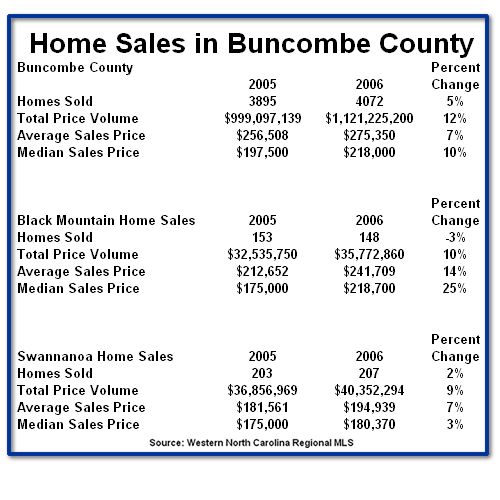 It's interesting to look at the Black Mountain home price range in the last year and draw some conclusions from those figures.  For homes under $100,000, only 7 sold in 2006 compared with 19 for the year before.  At the same time, for homes over $500,000, 4 sold in 2006 compared with 6 in 2005, not quite as dramatic a decrease.  The mid-range market stayed fairly steady.  One can attribute some of that tremendous increase in the median price range to the diminishing market of that lower-priced home. 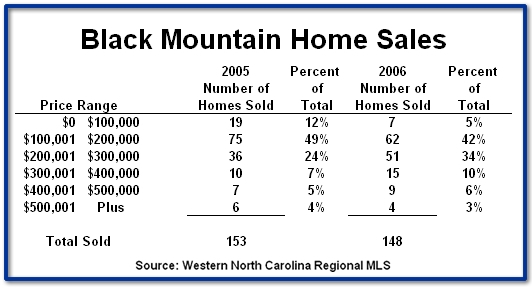 One final group of numbers that I have studied indicates that interest in land in Black Mountain continues to be very high.  With volume over $14 million, land sales have increased more than 34%, but there has been only a modest price per acre increase of 4%.  Look at those same figures within Swannanoa, and one might think that there has been a surge in volume and dramatic decrease in price per acre.  A closer inspection, however, indicates that the majority of that 483% increase in volume and 46% decrease in price per acre can be attributed to a single sale of 700 acres for $6.5 million.  When considering statistics as I have done this month, it is important to consider large purchases such as the one in Swannanoa, which can skew the numbers and create a one time effect on the statistics. 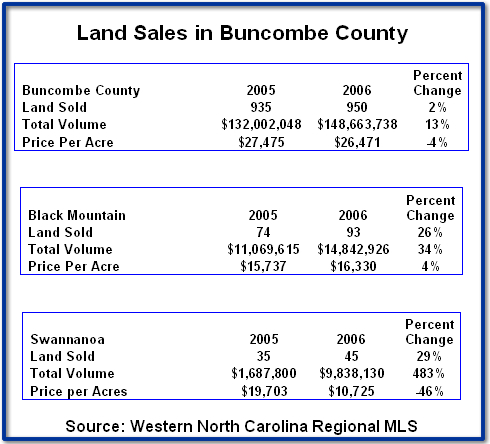