I thought it would be interesting to study this year's ending numbers as I did last year's, if only to confirm my feeling that the Black Mountain housing market continues to do well, bucking the national downward trend.  What I found in my analysis was surprising from two standpoints.

First of all, it was astounding how well the Black Mountain real estate market is doing.  And secondly it was surprising to study that market in contrast with the county market and real estate activity in surrounding towns.  For my comparisons, I have always used the Multiple Listing Service (MLS) numbers which do not include for sale by owners or new construction. 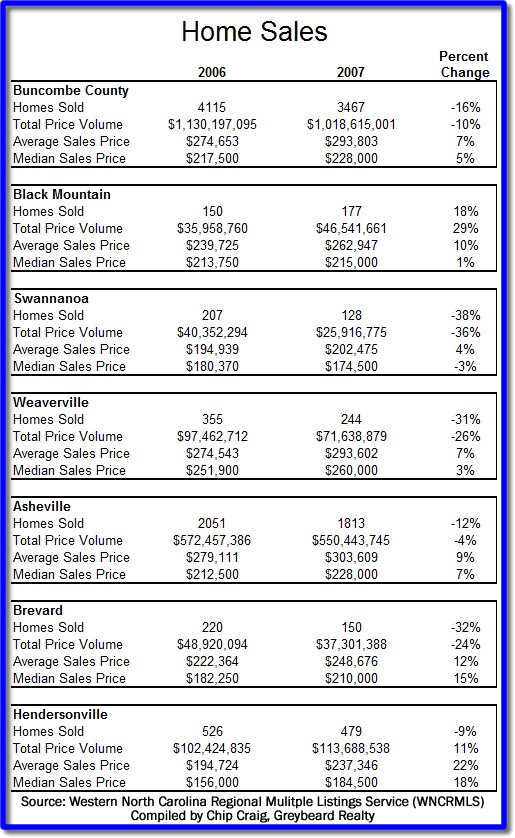 So I asked myself the next logical question: why is Black Mountain continuing on its steady path while the real estate markets of surrounding communities and the county overall are slipping?  I had my own theories, but I went first to others with interests in the area and came up with some solid theories.

First of all I asked my Greybeard Realty sales brokers for their opinions, and several of them said that the folks they are working with just love Black Mountain.  They indicated that their clients love the quality of life, the small town feel and the close proximity to Asheville.

"Many people I show property to have driven all around Buncombe County," explains Rosie Johnson, a Greybeard broker.  "Black Mountain appeals to them most because of the quaint downtown, the friendly people, the great restaurants, and even the gym at Cheshire.  There's really nothing else like it in the rest of the county."

Another person I contacted was Greg Palombi with Accurate Appraisal Services and owner of Asheville Real Estate Network.

I agree with his explanation that the increase can be attributed in part to pent up demand.  Two years ago I remember there were only 55 homes on the market in Black Mountain.  Now there are 140.  I can remember being frustrated that I had buyers but couldn't find them the right property.

I have another theory that Black Mountain has been "found."  Several articles have appeared about Black Mountain in national publications such as The New York Times, and we have several new Black Mountain developments that are advertising nationally.  I talked with Bob McMurray, president of the Black Mountain Swannanoa Chamber of Commerce, and he notes that the Chamber has seen increased traffic during 2007.  The website alone has received 20% more visitors than it did in 2006.

Another idea that I do not have the numbers to support, is that I find the Black Mountain market to be more retirement and second home driven than other areas in the county. That may be another reason that Black Mountain is not following the downward trend that the national real estate market is.

Given the easing of interest rates and the rapt attention on the economy that the 2008 presidential race has generated, I believe that Black Mountain will continue to buck the national trend in the real estate market.  And I think in the year to come even more people will come to appreciate the special qualities Black Mountain has to offer.