These charts are based upon information gathered from the Asheville Area Multiple Listings Service (MLS) for the first quarter of 2007. A brief analysis revealed some interesting statistics.  Please note that the figures presented do not include sales outside of the MLS system such as "for sale by owner" properties and developments not listed through MLS (such as The Settings).

One of the most surprising figures is that 67% more homes were listed in Black Mountain during 2007 than in 2006.  In fact, there were 72 homes listed this year compared with 43 last year.  This increase appears to be dramatic, but in fact it may  be more telling about 2006 than 2007.  During 2006 there were many fewer homes on the market in Black Mountain than in past years. In other words, this statistic tells me that the Black Mountain market was particularly tight in 2006.  The change in number of homes listed wasn't as dramatic for Buncombe County or Swannanoa in 2006; these communities showed a lower increase of homes listed of 22% and 17 %, respectively, for 2007.

In Swannanoa, the total volume and number of units sold in the first quarter of 2007 were well below 2006 figures.  Again, however, this is indicative perhaps of the sales in 2006 in several new subdivisions including Cherry Blossom Cove, Fernstone Village and Craggy View Cottages.  The sales in 2006 may have skewed the numbers, making it look as if sales slowed in 2007 when in fact they are not far off of the average. 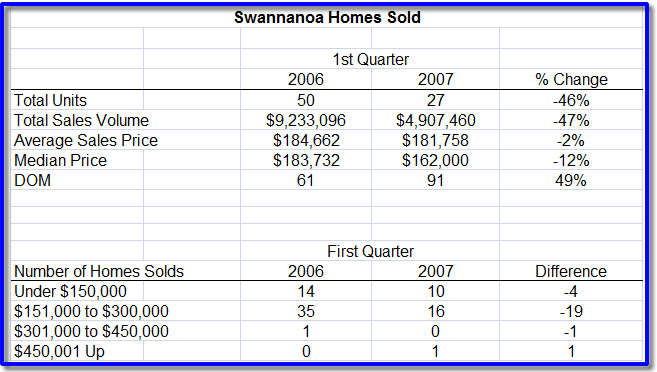 A look at the figures for Black Mountain home sales prices indicates a drop of 8 percent for the first quarter of 2007. In 2006, however, one of the most expensive homes in Black Mountain sold for $1,045,000, which elevated total sales volume and average sales price for that quarter of the year. Also, Black Mountain home sales for 2007 included 2 mobile homes, one for $10,000 and one for $29,000, bringing down the average sales price for the quarter. If you look at specific numbers and remove these homes, the market was basically flat during the first quarter compared to 2006, with the median price up slightly by 3%. 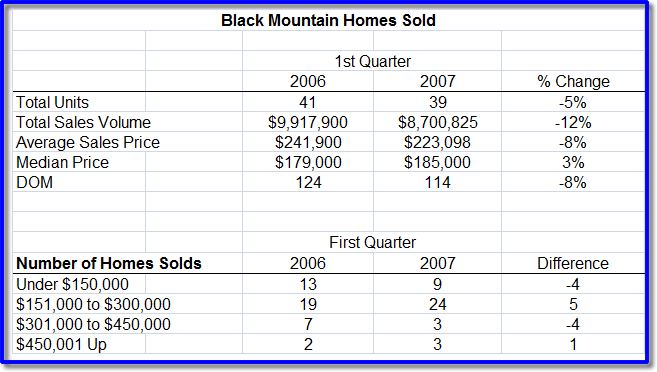 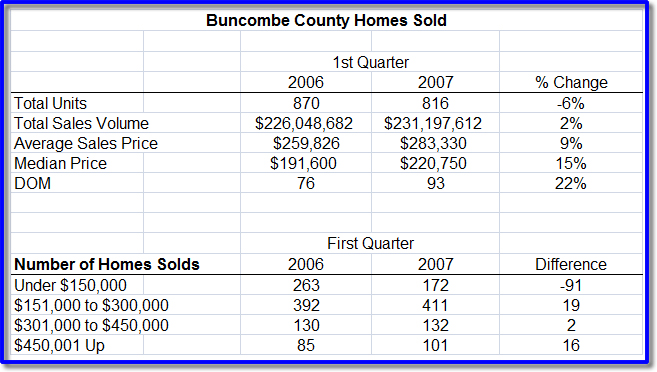 Another key statistic to track in evaluating strength of the real estate market is days on the market. Buncombe County had an increase in the first quarter of 2007 from 76 days to 93 days, an increase of 22 percent that may indicate a slight slow-down in county home sales.

In conclusion, the real estate market seems to be stable for now. The only softness in the Black Mountain sales market seems to be home sales over $300,000. What appears to be a dramatic increase or decrease may in fact just reflect a return to a normal pattern. It may well be last year's numbers that were extraordinary. In short, while numbers are interesting and do give good information when interpreted properly, using a small sample of figures over a short period of time to may lead to the wrong conclusions.